We always felt a certain urgency about this impeachment given that the president was trying to get foreign help and cheating in the next election. But as soon as we did take up and pass the articles Mitch Mcconnell made it clear he didn’t want a trial in the senate. That he didn’t want to hear from witnesses, he didn’t want documents and this time has given us the ability to show the American people the necessity of a fair trial. To expose the degree to which McConnell is working hand in hand with the subject of the impeachment, the president, to essentially turn what should be a trial into a sham. And that time has been I think very effective in not only bringing new evidence to light, and the evidence was already overwhelming. But also forcing senators to go on record. Do they want a fair trial when it’s fair to the president but also fair to the American people, or are they going to participate in a cover-up? I think it’s been very effective and as you have seen additional evidence continues to come to light that not only has bolstered an already overwhelming case but put additional pressure on the Senate to conduct a fair trial.

The last thing I’ll say is Mitch Mcconnell has taken to saying that the senate should only consider the closed record that comes from the House. And as if what the senate is is not a trial but an appeal from a trial. But of course the senate — the framers had in mind a real trial with witnesses and evidence and if McConnell makes this the first trial in history without witnesses it will be exposed for what it is and that’s an effort to cover up for the president.

Finally, some have suggested as part of your question, why didn’t we wait to get more testimony? Well, we have sought McGahn’s president — Don McGahn’s the president’s lawyer since April of last year. We still don’t have a final court judgment, so yes, we could have waited years to get testimony, further testimony from all of the people that the president has been obstructing, but that would have completely negated the impeachment power. By virtue of obstruction to prevent his own impeachment and that was an unacceptable course particularly when the whole object is to cheat in the election which is the ordinary way for dealing with a corrupt presidency.

Senate Majority Leader McConnell (R-KY) created this situation by openly announcing that he is working with Trump on an impeachment trial cover-up. Chairman Schiff has a very interesting strategy of not only making the case against Trump but pressuring House Republicans to do the right thing in the trial. Schiff is making it clear that it isn’t just Trump who is on trial, but also Senate Republicans and Mitch McConnell, who will go down with this president if they embrace the cover-up. 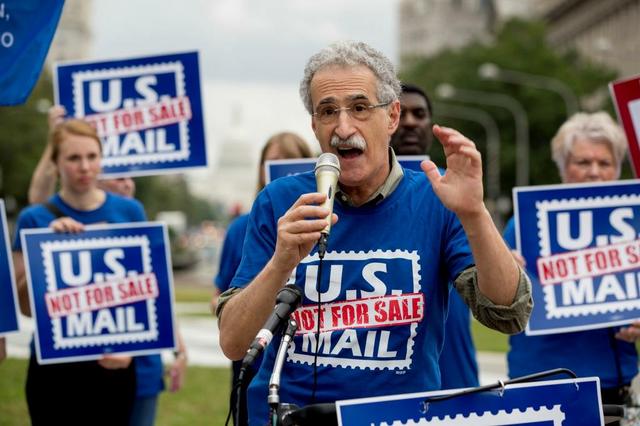 American Postal Workers Union President Mark Dimondstein speaks at a rally to oppose a plan by the White House’s Office of Management and Budget to sell off the U.S. Postal Service to corporate interests, at Freedom Plaza, October 8, 2018, in Washington, D.C.

The United States Postal Service (USPS) finds itself at a crossroads between the Trump administration’s prescription for privatization and the potential to implement more innovative services. The current postmaster general, Megan J. Brennan, announced her retirement in October 2019, and whoever the Board of Governors appoints to fill the vacancy at the head of America’s oldest and most popular public service will decide which path USPS takes.

The four postal service unions have made it clear that whoever replaces Brennan should commit to not privatizing the USPS. They’ve pressed this point through demonstrations, petitions, and a national advertising campaign called “U.S. Mail: Not for Sale.” The fear has been palpable since the Trump administration published reports in 2018 that recommend varying degrees of privatizing postal services.

“The postmaster general has an awful lot to do with the well-being of the public institution of the United States Postal Service,” said Mark Dimondstein, president of the American Postal Workers Union (APWU), in an interview with the Prospect. “A new PMG cannot decide to sell the post office, but can they set it up to be sold? Can they undermine it? Can they put in policy that would ripen it for privatization? And the answer is yes.”

Technically, neither President Trump nor his administration has any say on who the next postmaster general is, but members of the USPS Board of Governors, who make the decisions, are all appointed by the president. The board has also been directly coordinating with the Treasury Department, whose report favored steps toward privatizing, says Jim Sauber, chief of staff for the National Association of Letter Carriers (NALC).

The APWU started the year with a demonstration outside USPS headquarters in Washington, D.C., where the union delivered 400,000 petitions demanding the Postal Service Board of Governors appoint a new postmaster who will preserve its universal-service mission.

The Trump administration commissioned a task force to evaluate the financial viability of the USPS in April 2019, chaired by Treasury Secretary Steve Mnuchin and composed of other administration officials. This report was only called for following President Trump’s public feud with Amazon CEO/founder (and Washington Post owner) Jeff Bezos, and a less public meeting with Postmaster General Brennan, about doubling shipping rates paid by Amazon.

“It’s clear that the task force came out of his tweets against Jeff Bezos,” Sauber said, in an interview with the Prospect. “Trump then met with the postmaster general and wanted her to raise the rates against Amazon, which the Postal Service couldn’t do because it would break its service agreement with Amazon.”

Brennan had several meetings with Trump about the Postal Service’s contract-like service rate agreement with Amazon, with Trump asking for the USPS to go back on the agreement and up-charge the online retail giant, according to The Washington Post. Trump called the Postal Service Amazon’s “delivery boy” on Twitter in March 2018, less than four weeks before he instituted the task force.

It’s true that Amazon packages make up a significant portion of the USPS’s business, but so has all packaging and e-commerce sales. “We have a saying in our union, ‘the internet taketh, and the internet giveth,’” Dimondstein says, referring to how sales have changed. The Postal Service’s business operations have shifted heavily toward packaging sales as the need for certified mail and letters has declined. According to the 2019 end-of-year fiscal report, shipping and packaging (which includes both shipping and returns) made up about 32 percent of the Postal Service’s operating revenue, steadily increasing from previous years.

Trump is correct that the USPS has net losses on its balance sheets, but not because of its operating costs. “The underlying financial problem was the 2006 Postal Accountability and Enhancement Act, which put an absurd, onerous, and unheard-of burden that no other company and no other agency has to face,” Dimondstein says. The USPS actually makes a modest profit based on its current operating revenue and costs, but the Postal Accountability and Enhancement Act forced the USPS to start funding retirees’ health benefits in advance for the next 75 years, saving for employees who aren’t even born yet.

These retirement savings were also mandated to be invested in low-yielding Treasury bonds, Sauber says, which have therefore earned much less interest than even the standard thrift savings plan, the government equivalent to a private company’s 401(k). This law also makes the USPS the third-largest creditor of the U.S. Treasury, Sauber says.

“The underlying financial problem was the 2006 Postal Accountability and Enhancement Act, which put an absurd, onerous, and unheard-of burden that no other company and no other agency has to face.”

The Trump administration’s solution to this artificially manufactured financial struggle is not to support the USPS Fairness Act, H.R. 2382, which would repeal the pre-funding burden, but instead to open up the Postal Service to private interests. The government’s recommended approach risks the USPS’s universal-service requirement, which guarantees service to anyone no matter where they live in the U.S., whether that’s a traffic-dense urban center or rural and remote communities.

The Heritage Foundation, a Trump-allied think tank, has called for privatizing the Postal Service for decades as a way to reduce “big government.” But the USPS is operationally self-sustaining and does not get any funding from taxes. Meanwhile, private companies aren’t obligated to provide the same universal-service benchmark as the post office, which would greatly impact many Trump supporters in rural communities, Sauber says. “Privatization would be a catastrophe for rural America. It would be a catastrophe for Trump’s America. That’s his base,” he says.

“There’s always been a struggle around partial and piecemeal privatization in modern history,” Dimondstein says. “But there’s never been an administration in modern history that openly advocated, fought for, and said, ‘This is an opportunity to sell off the entire post office.’ So 20, 30, 40 years of Cato Institute and Heritage Foundation efforts to put a target on the back of the public commons, in this case the public postal service, now has more standing and power and opportunity for them to implement what they’ve wanted to do for a long time.”

The unions believe there are a lot of “creative” and “proactive” ways to expand on post office services and add revenue streams. The post office could return to offering postal banking, which it did from 1911 to 1967 and which has been part of Senators Bernie Sanders’s and Elizabeth Warren’s presidential-campaign agendas. A postal banking system could cash checks, provide international money transfers, facilitate bill payments, and offer any American a simple bank account and possibly even low-dollar loans. “We could provide basic vanilla financial service at affordable rates,” Sauber says, adding that the post office could do money transfers for one-tenth of the rate Western Union charges.

Dimondstein says the USPS has many possible roads for expansion, including participating in the growing demand for vote-by-mail ballots, offering printing services and wireless internet, and in some locations approving hunting and fishing licenses or electric-car charging stations. However, the implementation of these ideas rests on the willingness of the next postmaster general.